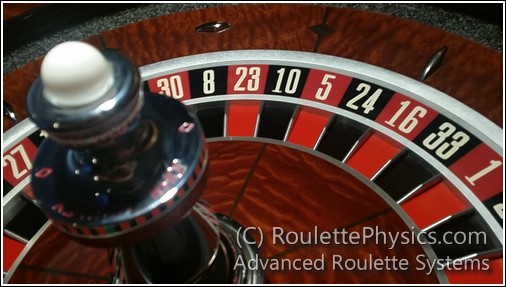 See the recommended site explaining bets for roulette (click link), and you can also find a roulette game for fun to test your roulette system.

Each of these numbers coincides with the number found on the roulette wheel. During the gambling game in the casino, players are supposed to bet on the numbers where the white spinning ball lands. The white ball spins in the opposite direction to the wheel, and both are set into motion by the dealer. During betting process, the players are allowed to make late bets even when the roulette when spins. But this is controlled by the dealer who may declare “stop bet”, to note that no more betting can take place.

Losing and Winning the Game

The white ball stops on a random number on the roulette wheel to determine the winners, whose bet numbers happens to coincide with the number on which the ball land on the wheel. All those who bet on other numbers become the losers, if they made inside bets. Those who lose the bet are not paid their bet money, but the winners are paid depending on the type of bet that they made.

The selection of the bet numbers also attracts different payoff. Different players play the gambling game on the roulette table layout for various reasons. Some people play to pass time, while others are professional players, playing to win real money. Many players however, would need to check on their bankroll, to control the mount of losses that they can comfortably handle in the bet. Some players, called the advantage players, belong to the professional class of players who have better understanding of the roulette table and wheel systems. They have slight knowledge on the bias of the roulette wheel over the average players and so can certainly put their bets correctly on the roulette layout table.

The differences in the reasons for play, and the goals that players have, make them either do an inside bet, or an outside bet. The choice of inside bet and the outside bet depends on the arrangement of the numbers on the roulette table layout. The straight numbers, from 1-36, plus the zero or double zero, depending whether the roulette table is European or American, makes inside bets. Inside bets are taken by risk players, who are not conservatory. The people who play to either win big or lose big money.  For example, when they make street bet, they have a chance of winning or losing at the ratio of 11:1 pay. Some other conservatory people play the outside bets. These are numbers, colors, and areas on the roulette table layouts that present fewer risks to gamble players. Their returns are almost certain ad thus preferred as a way of avoiding losing great bankrolls.

The outside bets can be determined by the colors, the number sizes, or the nature of the numbers.Red and black colour bets, have a 50-50% changes of winning, their returns have 50-50% chances and so they do not have much payoff. Odd numbers versus even number are also other types of outside bets that do not pay much. The use of high number and low number summarizes the outside bets that only have meager payoffs, but safe on the players’ bankrolls.

It is important you know what it takes to win big money in a roulette wheel game. Some people think it is all based on luck, while other players believe there are strategies that can be implemented to realize higher winning rates and reduce loosing rates. Similarly, other people use mathematics and probability to chance their winning streaks on the roulette table. In the recent times, people have developed roulette computers to increase their chances of winning the gambling game. However, in as much as the players would like to win, and using whichever system, the casino owners will always try to reduce the amount and number of wins that a single player can get in particular time duration.

Many professional players who have got advantage of the roulette wheel and roulette table at particular time periods have made some good fortune money. However, you risk prison term if you violate the rules of the game.

At the end of the day, a win or lose in a casino game will let the game continue. Players should not have constant losing streak, and the dealers must also check against a continuous win. The roulette table layout, whether American or European, however remains to only allow the players do their bets, but will not have a hint to any player.